I wanted to read Lucinda’s Solution to support a writing sister in my area and to find out what she writes about.  I was well rewarded for my curiosity.  I started reading and I couldn’t put the book down.  This is a historical novel with an excellent understanding of women’s issues during and after WWI when women were about to get the vote.  During much of the plot Lucinda doesn’t have much say even in her own family where her autocratic father makes the decisions about the lives of his children.  Roman brings the story to life, the condition of women, their trials and trumphs.  The characters are vivid and plot well-suited to bringing out the best in Lucinda.  I do love a bohemian solution.  Lucinda’s Solution reminds me of one of my all time favorites, John Knowles’ novel The French Lieutenant’s Woman.  Thank you, Nancy.

Small glass bottles are ideal for filling with water and a bit of food coloring.  You can play around until you find colors you like.  Today I created the moss green color and the turquoise.  The bottles sit on my table where I can see them and smile as I walk by.

My second sharing is about idioms.  How often do you find yourself accepting a trite expression without examination?  I do it all the time.  But every once in a while I wonder what is the story behind that image.  If you look for it there is a picture behind every word we use and behind each idiom.

I’m reading an old Zane Grey favorite, The Riders of the Purple Sage.  There is a tense scene in which the main character waits “with bated breath.”  Not baited as the word is often written.  That’s an error.  I looked it up.  But before I got as far as the dictionary entry,  I thought, “bated” as in “abated,” meaning “lessened.”  Yup.  The New Oxford American Dictionary says “bated” means, “in great suspense, very anxiously or excitedly.”  In the sixteenth century “bate” meant “restrain.”  Makes sense.

Sometimes I go through my own writing to make sure I have not let an error like that slip by or used a worn cliche without being aware of the image it evoked when it was fresh and new.  If I want to say something was completed in the nick of time, I try to at very least stop and think what nick would mean.  We know what we mean by the phrase but if it doesn’t give us a vivid picture, we may not get the same sharp idea the writer intended.  According to wikipedia, “nick” once meant a small notch marking the exact point.

I found a lovely list of cliches on this cite.

Making up one’s own images is, I think, a bit harder these days than in former times.  Our ancestors had nature and farm animals to refer to when they spoke.  When her children quarreled at chores, my mother would say, “Quit your pull-hauling.”  Anyone who had ever seen a team of oxen that refused to pull together would understand that image.  The disgusted farmer would say, “First one pulls and then the other hauls.”  Today we have driving images and those related to computers, the internet, and our many devices.  One joke has it that when a waitress slipped on some water and fell, a customer said, “Our server is down.”  Then there is the question how Bill Gates gets into his house when he forgets his key.  He uses a window.  When we use images related to computers and the internet, most people get the picture right away.

Still, I like the old images best.  But if I use them, I know I have to explain.  If I say “cock of the walk” I will add something to freshen it up or change it a bit: “he thinks he’s the cock of the barnyard fence” will do.

Sly as a fox looking for a break in the chicken coop wall.

Let’s hightail it outta here like heifers running from the cattle truck with their tails lifted high.

She’s growing like a weed, taller than a tomato plant and sturdier than kale.

Play with color.  Play with words.  The pictures behind the expressions we use are vivid and telling.  And don’t follow anyone’s guidance unless it’s as much fun as a barrel of piglets let lose in the barnyard.

If you find any worn cliches in my books, be so kind as to let me know.  Grin. 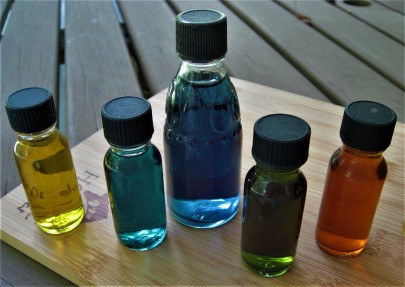 This is berry season at Wild Carrot Farm, a CSA near my home.  Each Wednesday I stop at their stand at the end of my road for such treats as fresh lettuce, cucumbers, Swiss chard, summer squash, and berries.  (Community Supported Agriculture or a CSA, as you may know, is a farm where members of the community pay a sum in advance in order to ensure the farmer can grow the food we will want.)

When I carry home my boxes of blueberries and raspberries, I recall the hours of my childhood spent picking berries in the woods that were part of our farm, raspberry canes drooping with berries in the glades and under the power lines, blackberries big as my dad’s thumb, blueberries in plenty in open patches.  Sometimes we brought home several pails full.  We used two-quart berry pails, tying the bail to a rope around our necks.  This left both hands free for picking.

Dad made a “blueberry board” to help Mom sort the berries.  It was a long board, somewhat wider than an ironing board, which she could prop on the table at a slant.  When she poured some berries at the top they would roll along toward a catching bowl at the end while she picked out the stems and leaves and white (unripe) berries at they rolled.  Dad nailed two long inch-thick boards along the sides to make a trough, wide at the top and narrow at the bottom where the bowl waited.  He provided two smaller sticks to stop the berries along the way, giving Mom time to complete the sorting.

On the evening of berry picking we ate bowls of blueberries with sugar.  We didn’t yet dream that sugar was bad for our health.  What we couldn’t eat Mom put up in pint jars with sugar syrup.  These went into winter pies.  Yum.

Now I eat my berries in yogurt sweetened with stevia.  I’m not sure when sugar and bleached white flour entered our family diet.  My mother and grandmother were not on the alert for any danger in these changes.  They trusted the manufacturers and merchants with, we can now say, a dangerous naivete.  In their place I would have done the same.  Today most of us are on the alert for dangers in our food.

This summer I watched my toddler granddaughter eat strawberries cut into quarters.  Organic berries were available in large boxes at the local Trader Joe’s.  Strawberries grown with chemicals are listed at the top of foods to avoid.  I learned recently that some chemicals may interfere with our good gut bacteria and may even damage our intestinal cilia, those tiny fingers that take nutrition into the blood stream.  You can’t live without a way to move food from the tummy to the rest of the body.  You can’t live without your digestion.  I worry about children whose parents don’t know what is in their food.  Our children are vulnerable–and utterly dependent on the care we give them.  Here is my granddaughter with her caring and knowledgeable mama.  She is precious but no more precious than many another child to whom life may not have been so kind.

Since my health memoir Tummy Story was published I’ve encountered several other health memoirs.  It must be the year to share our detective work on the path to better health.  With traditional medicine beginning to combine their tools of diagnosis with nutrition and other models of medicine, with alternative medicine increasingly available, and with the internet at our finger tips, we can find out most anything we need to know about how the body works and how to help it–or at very least how not to interfere with the wisdom that is built into our bodies.  (See Tummy Story: Digestion in the Age of Processed Food and Antibiotics.)

We live in an age of miracles.  When I left my home in the early 1960s, there was no such thing as a personal computer.  The first computers were as big as houses.  There was no chance of my wandering the yet-to-be-created internet to find what I needed to know.  Maybe I was lucky to go to many places and try many ways of living.  But we are lucky today to have good health guidance and much more at our fingertips.